Wow. What a day. We were picked up from the hotel by our lovely guide and driver, George.  He is from a village on the shores of Lake Victoria, but has lived in Arusha for 20 years. He grew up hunting Impala, did his 8 months of compulsory national service, worked as a Vet assistant in the national parks tranquilizing animals for blood samples and so on, then returned to school to study to become a guide. He loves animals, and working with people and so far, we are very impressed.

We drove from Moshi towards the west, past Kili whose summit was clear above a low cloud line, the JRO airport we arrived at, and into Arusha. Traffic was heavy and somewhat chaotic, but after China, my chaos standards are pretty high. Watching people walking along the road, Masai tending to herds on the roadside, motorbikes – up to 4 people on a bike at once, the ramshackle stores, the fresh food market – we even saw a ‘butcher’ with a leg of meat hung in a cupboard, cutting bits off for customers. A stop to collect some paperwork from the Wayo office, then to collect our lunch packs before setting off for Lake Manyara National Park.

After leaving Arusha, the landscape quickly became quite dry and barren. We saw many small groups of Masai, their thatched wet season huts, herds of goats and cattle and bright red draped clothing. Several hundred were at a market, trading animals on one side, fresh food and other goods on the other. This was the real Masai country. We were so surprised to see such traditional lifestyle by the roadside, not realizing that they did still live that way, so close to town. They walk to a swampy area in the dry season to feed their herds, then back to this drier area in the wet season. We went past one settlement that apparently housed one man, his 20 wives and 105 children. The government built him a school on his hillside in exchange for his services to population!  We also drove past a Masai tourist town, much advertising, so many souvenir shops, so many paintings for sale, a more than a few flabby white tourists. We also past a couple of pairs of young Masai men with white painted faces. George explained that this was part of their initiation and circumcision that heralds their arrival as men, at around 15 years old. The detailed paintwork, ostrich feathers on their heads and just walking along the side of the road. The boys must keep their eyes open when the knife comes down, or they are deemed to be soft. The white face paint indicates to the girls that they must keep away!

Lake Manyara is the smallest of the national parks in northern Tanzania. It is mainly water, but there is 110 sqkm of land based park. It is promoted as being the place you are most likely to see a lion sleeping in a tree, but George scoffed at that. We stopped and ate our lunch in a designated spot where a solo blue monkey was close by, then foraged for leftovers as tables were cleared. Being a national park, all rubbish was taken out with us. We saw a few groups of monkeys – blue monkeys (which are almost black), Oliver baboons and vervat monkeys with the most amazingly bright powder blue scrotum!  We saw our first elephant (then another 3), a few hippos wallowing at the hippo pool, herds of zebra, small herds of impala – groups with one male and many females and young, and the bachelor herds of many young male impala, as well as seeing a pair fighting. The impala are a good looking animal – muscles rippling under their hide, tails with white tips twitching away the flies, pretty painted faces.  A big herd of wildebeest, a small family group of warthogs wandering across the plain with two young and two females, a couple of giraffes, the smallest of the antelope – dikdik and a large monitor in a tree.

The magic moment was when we saw a baboon on the side of the road and stopped to watch as a few more baboons came out from the roadside scrub, and then more. It was a group of over 60, running down the road and tumbling into the trees and bushes either side of the vehicle. Youngsters teasing each other, scuffling, then two leapt up onto the bonnet of the car to watch us closer. We saw a baby suckling, less than 5 feet from the car, just so many monkeys surrounding us. It wasn’t noisy at all – only a few grunting sounds. They seemed so at peace with us so close – and we were all spellbound.

We saw lots of birds – hornbills and bee eaters, kingfisher, heron, Egyptian geese, a small flock of ostriches, a massive flock of flamingos from a distance, a bishop bird and a Eurasian roller – a pretty blue bird. Lots of trees as well – mahogany with crazy red and black fruit, the quintessential African tree – the flat top acacia. Funny story about that – it is no relation to the acacia genus in Australia so the African are under pressure to find a new name for it – there are more Australian acacias so apparently we get to keep the name for our genus. There were enormous sycamore fog trees, flame, palm and thorn trees, the remarkable sausage tree with big pale sausage shaped fruit dangling down, all fed by artesian water the landscape here was such a contrast to the landscape only 20 or 30 minutes down the road, to the east.

The lake and national park is on the floor of the Rift Valley that runs from Jordan to Mozambique – 6000km. The western escarpment of the rift is very pronounced, and it was above this escarpment on the lower slopes of Ngorongoro that we are staying the next 2 nights. As we left the park and started driving up the hill, we could see the valley floor below us, and an enormous dust storm front blowing across behind us. Just as we got to the top, the cloud engulfed us, reducing visibility to less than 100m for a short time. Within minutes it had blown past us and we had climbed a little higher as we passed school children walking home from school after their long day (it was 5:30) whilst smaller children were helping tend livestock.

We reached the town of Karatu and turned up the drive to the Rhotia valley lodge and orphanage. We arrived at the tented lodge – and were blown away again. A stunning spot high on the hill, overlooking the valley below us and just in time for the sunset and dusk. We were shown to our tents – a large canvas tent for two with a thatched roof and ensuite bathroom with solar hot water for the shower and a bucket to collect shower water to be used for toilet flushing. They are very comfortable. The main area had several large fireplaces, scattered couches and chairs, smaller chairs and table near the balcony, under a huge thatched roof with fairy lights dotted around. There is a large herb, fruit and vegetable garden with most plants labeled, and herbs line the winding paths between tents. The kids found a few cats and then a couple of small kittens, surely less than 8 weeks old (I’m no expert, but they were still suckling). A Dutch couple set up the lodge and the adjoining orphanage. We have arranged to be able to meet with some of the children tomorrow afternoon, and hopefully Luca can have a chance to play soccer with them.

On arrival we were welcomed with moist towels and a small glass of banana juice. Once we had been seen to our rooms, we settled onto the balcony to start writing up our day and going through photos. Some Pringles and then some curry puffs were brought out while we had a drink, watching the changing colors of the valley as the light dropped.  Dinner here was a set menu with a tomato soup, a meat dish (nyama choma) with warm spicy pineapple chutney, ugali croquettes and a salad of tomato, cucumber, cabbage and capsicum (kachumbari). It was so nice to eat some salad. Fingers crossed the tummies stay happy. Dessert was a fruit crumble of banana and pineapple. Followed by a lovely local tea – I’ll find out more tomorrow. 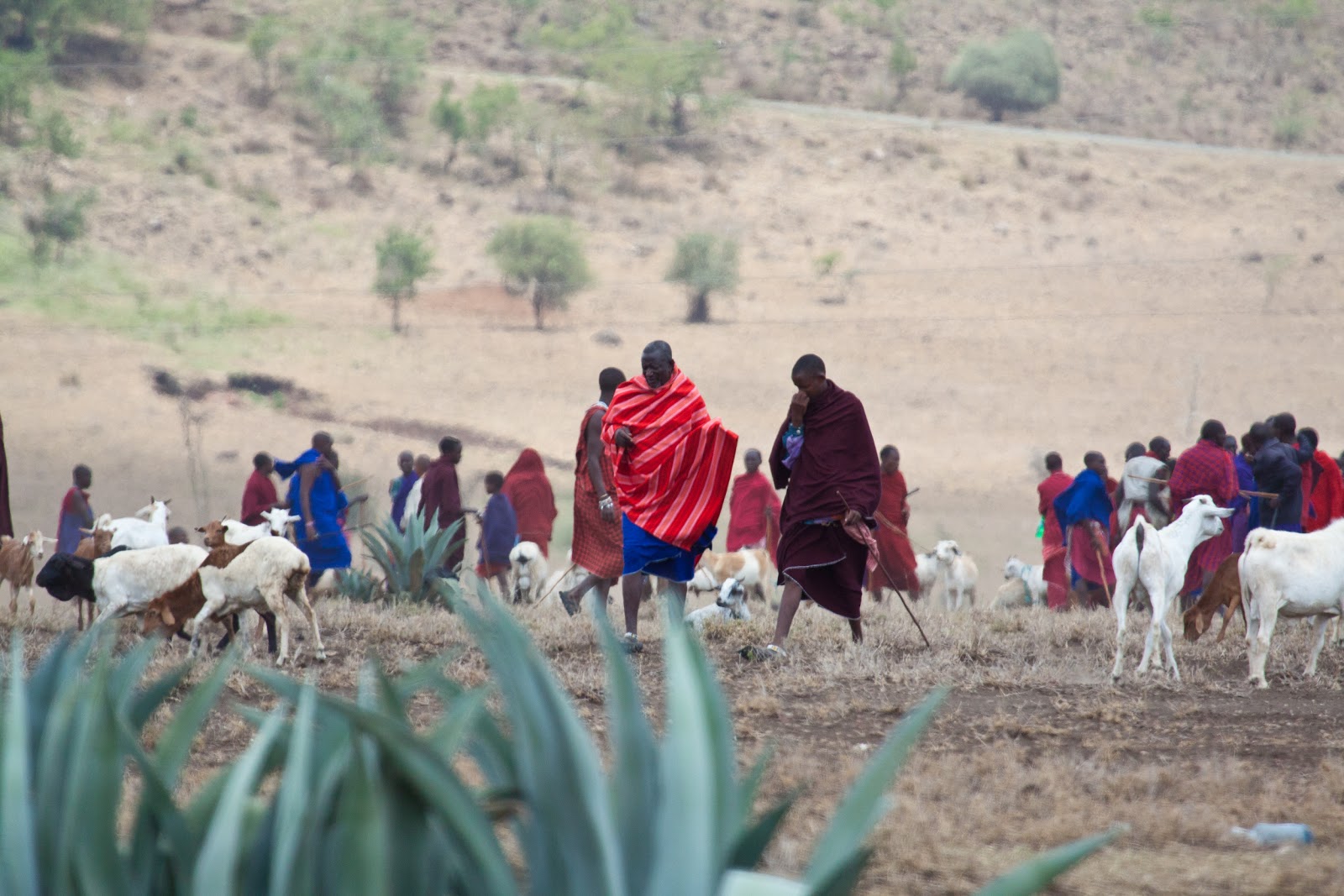 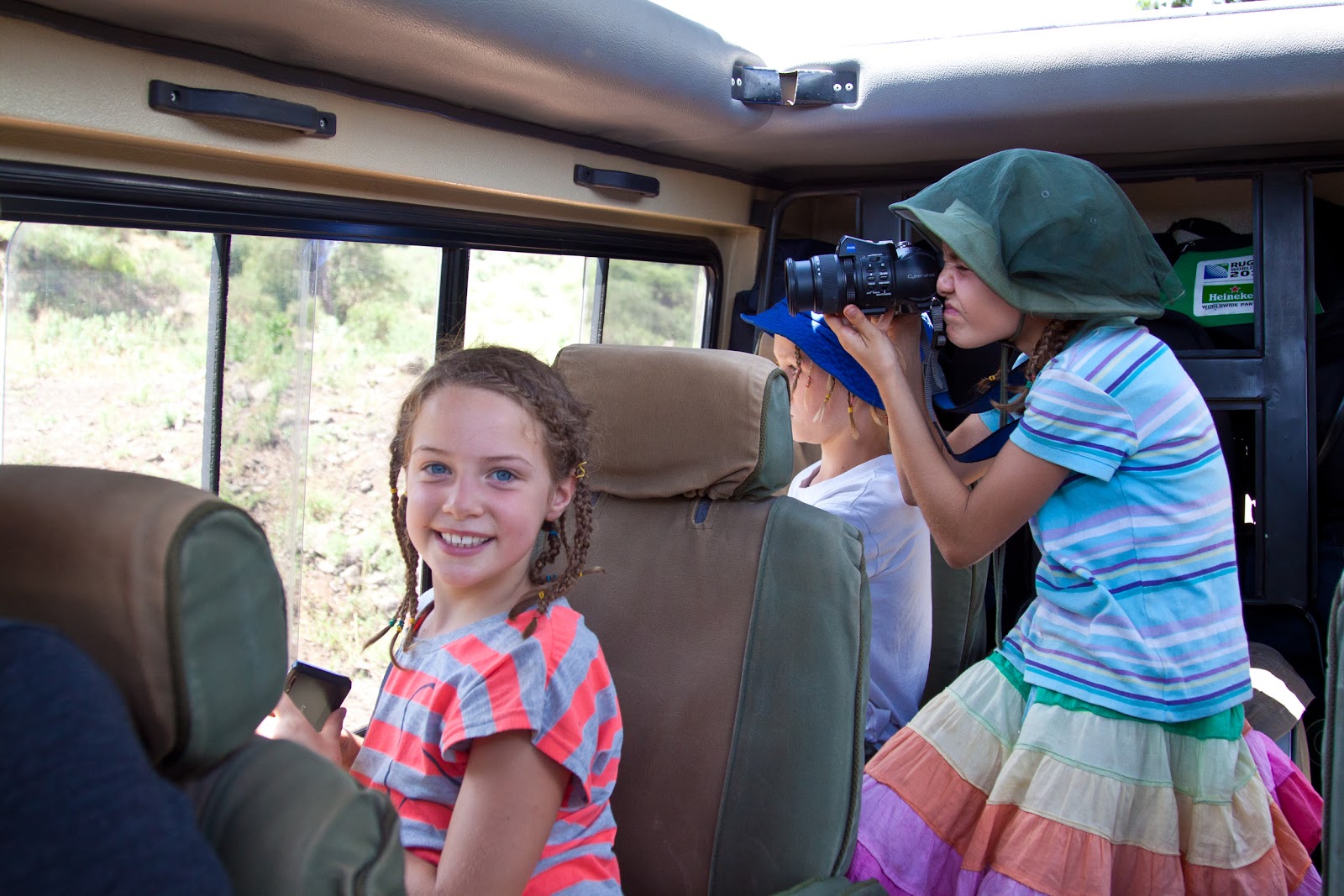 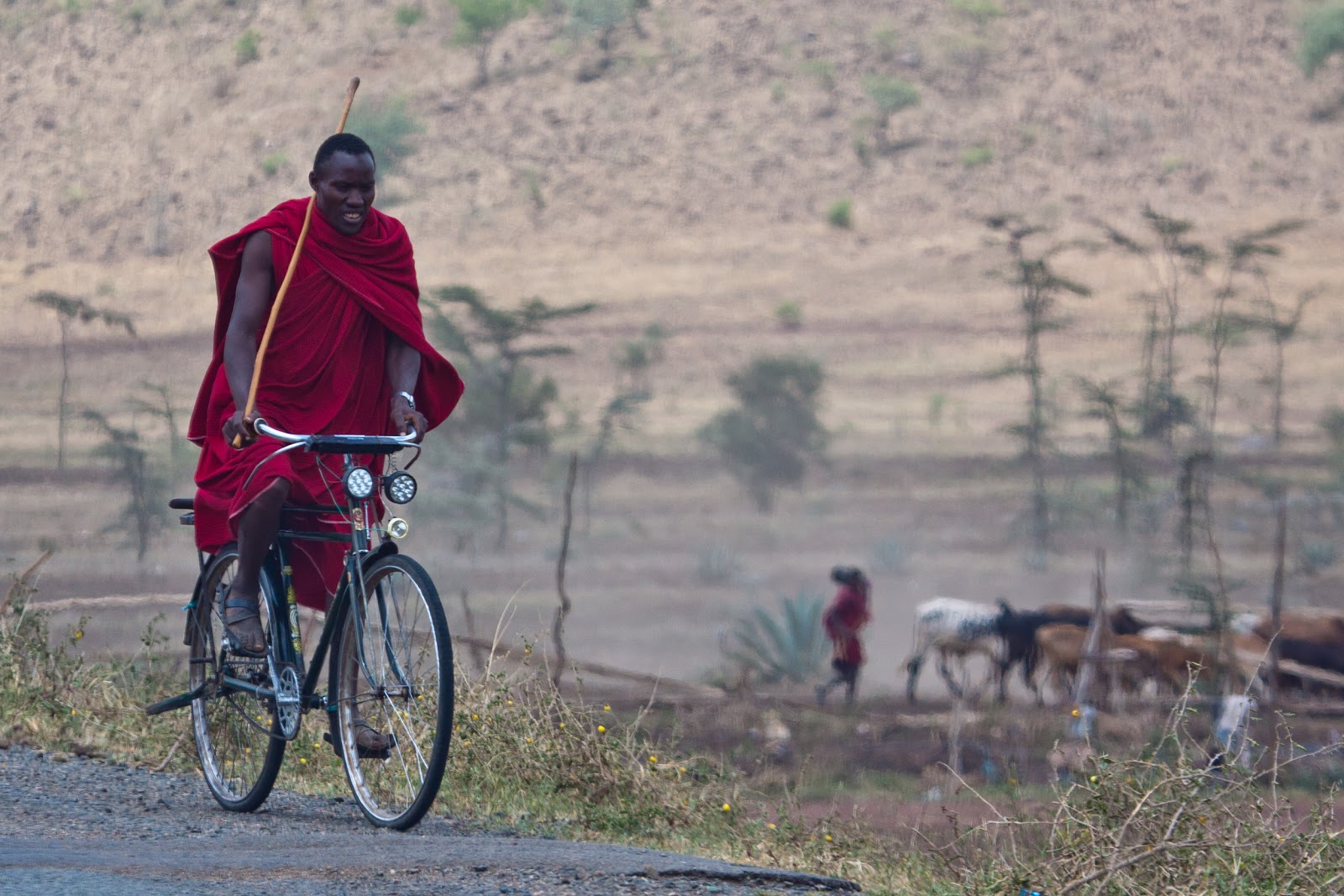 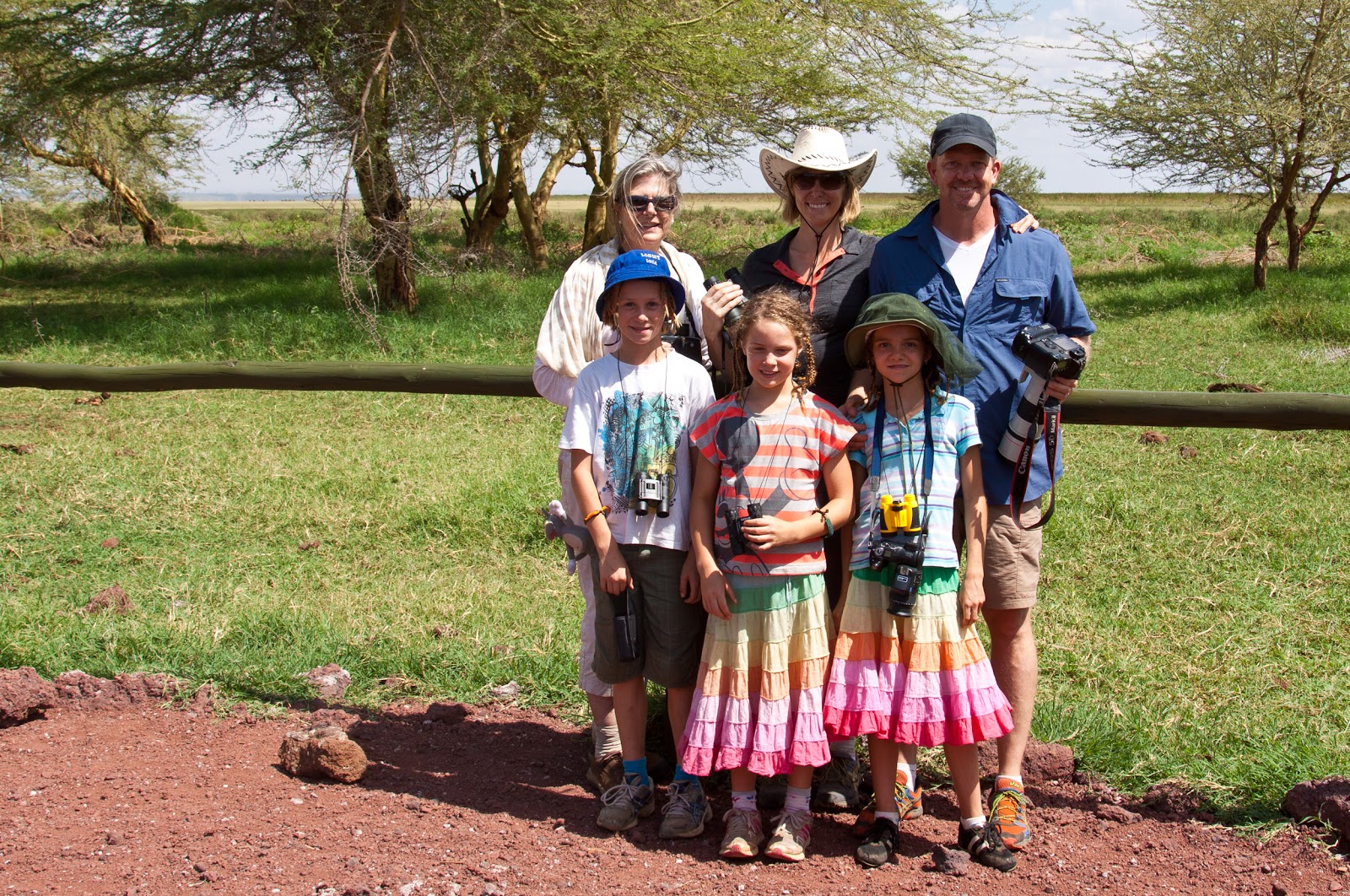 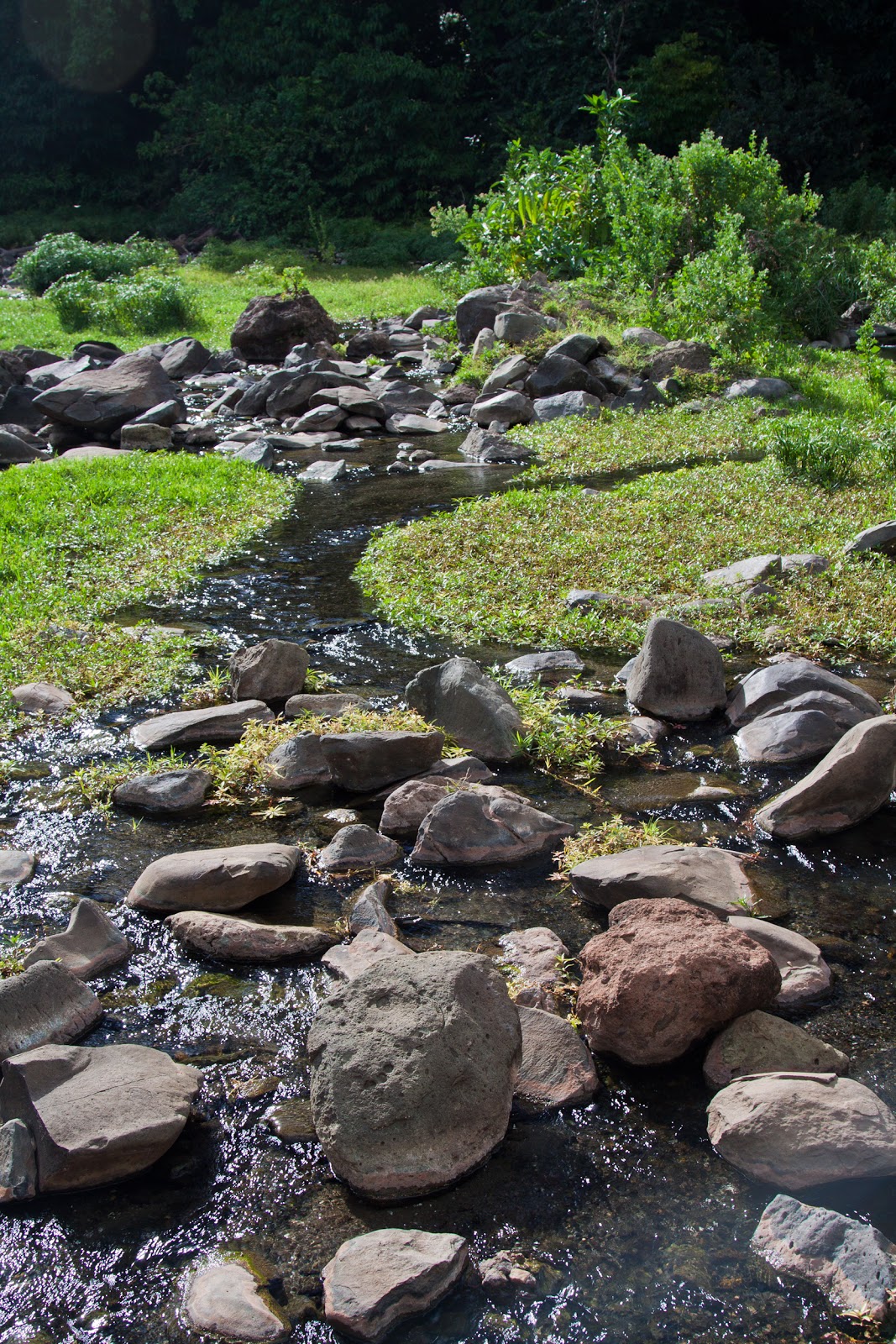 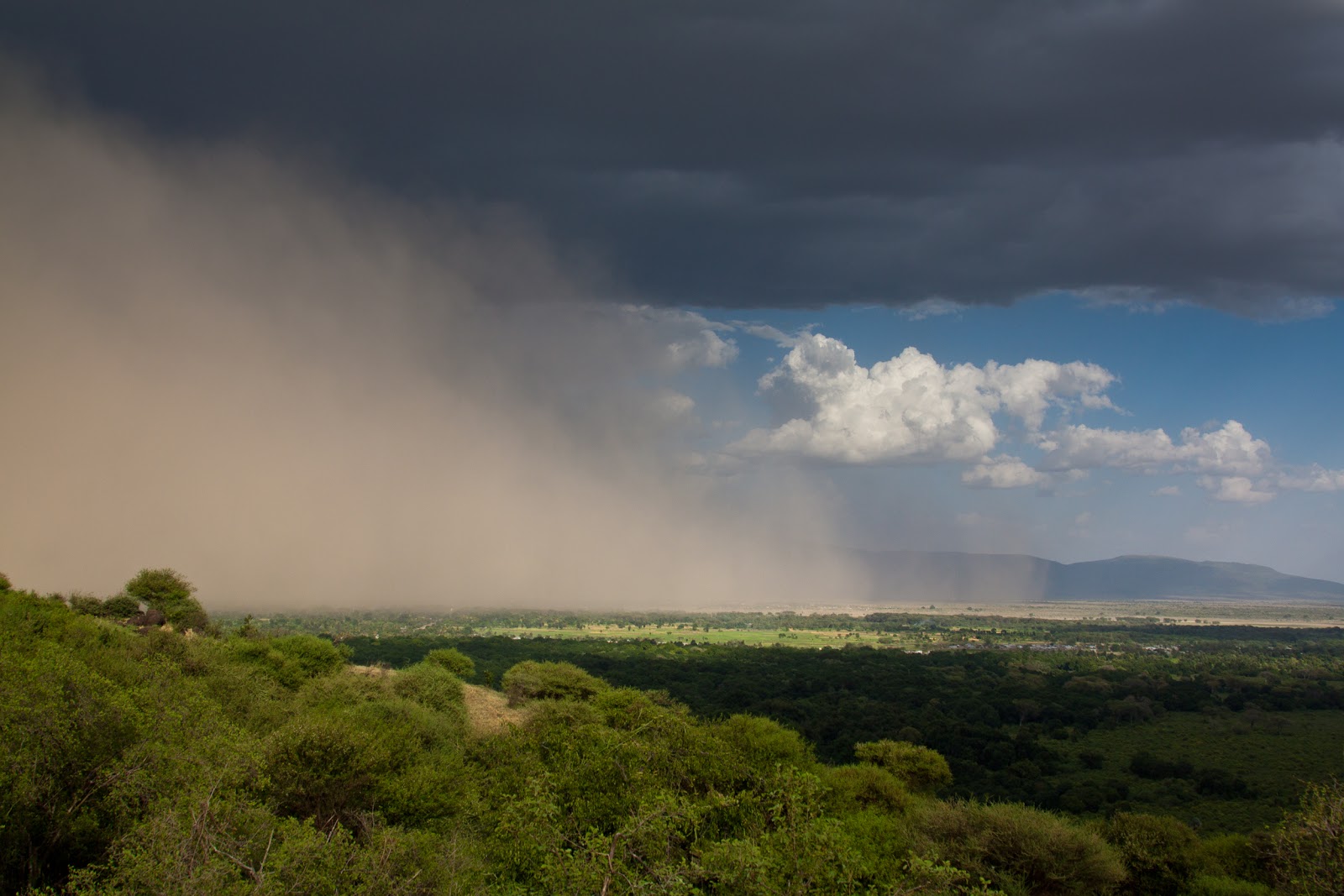 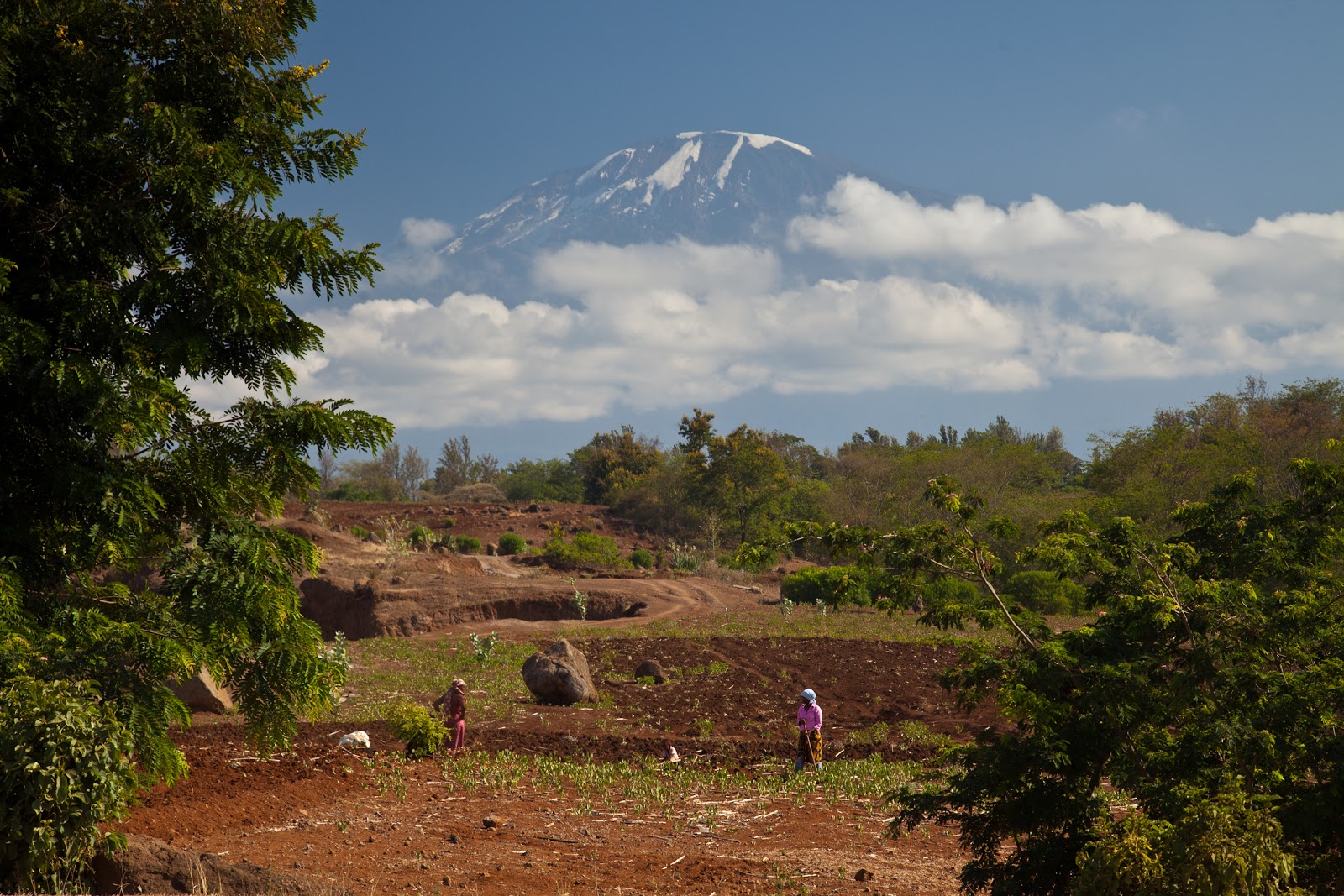 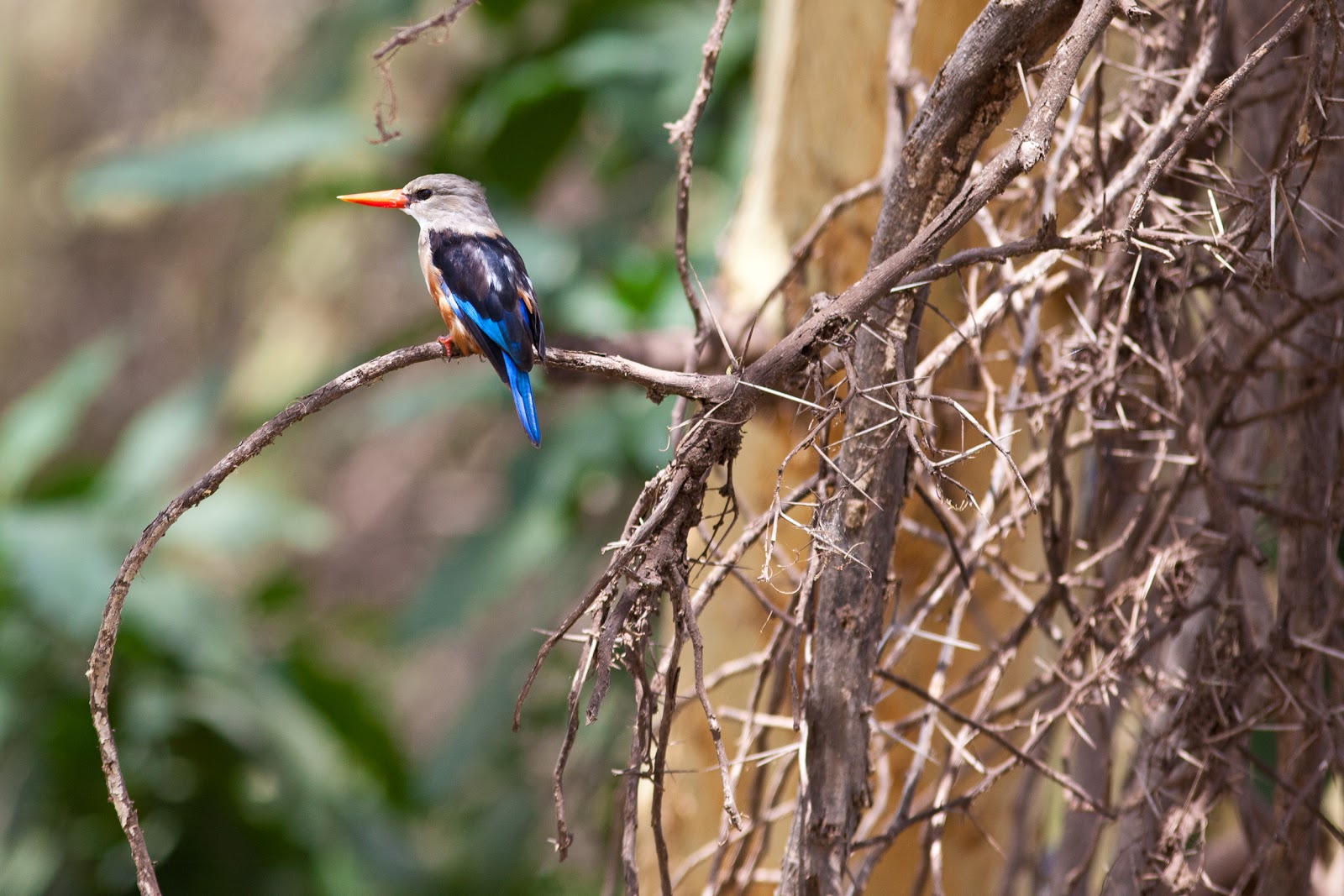 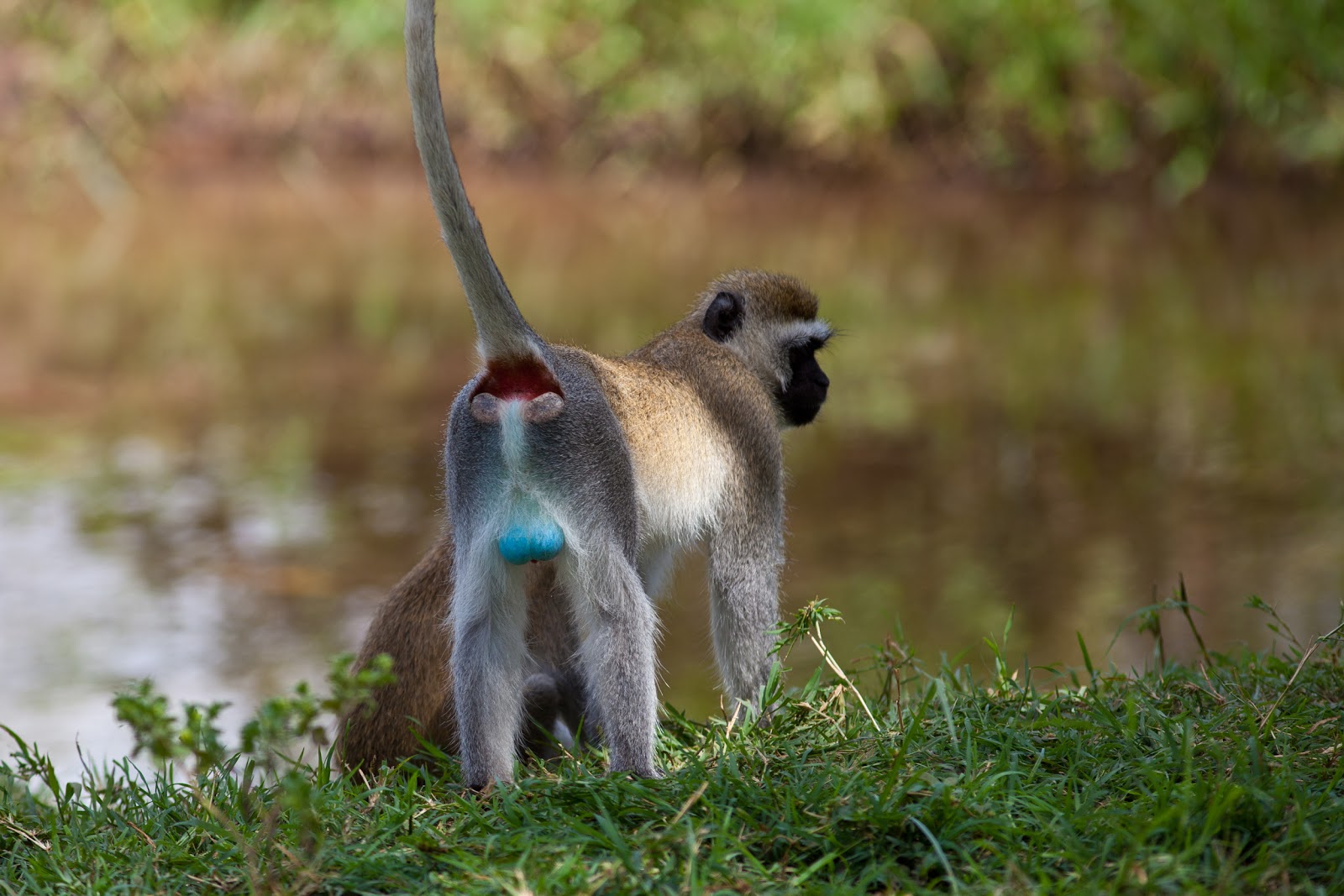 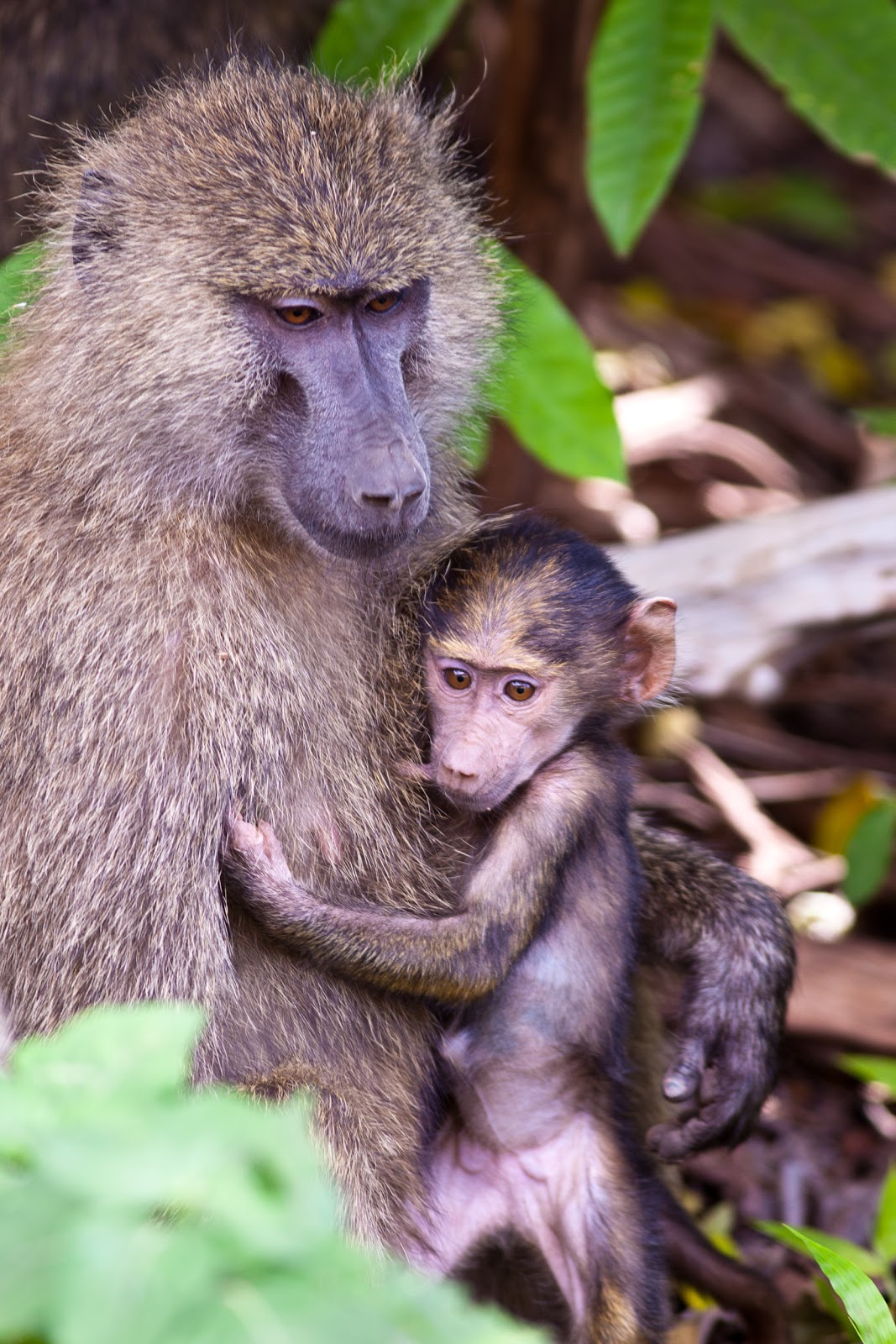 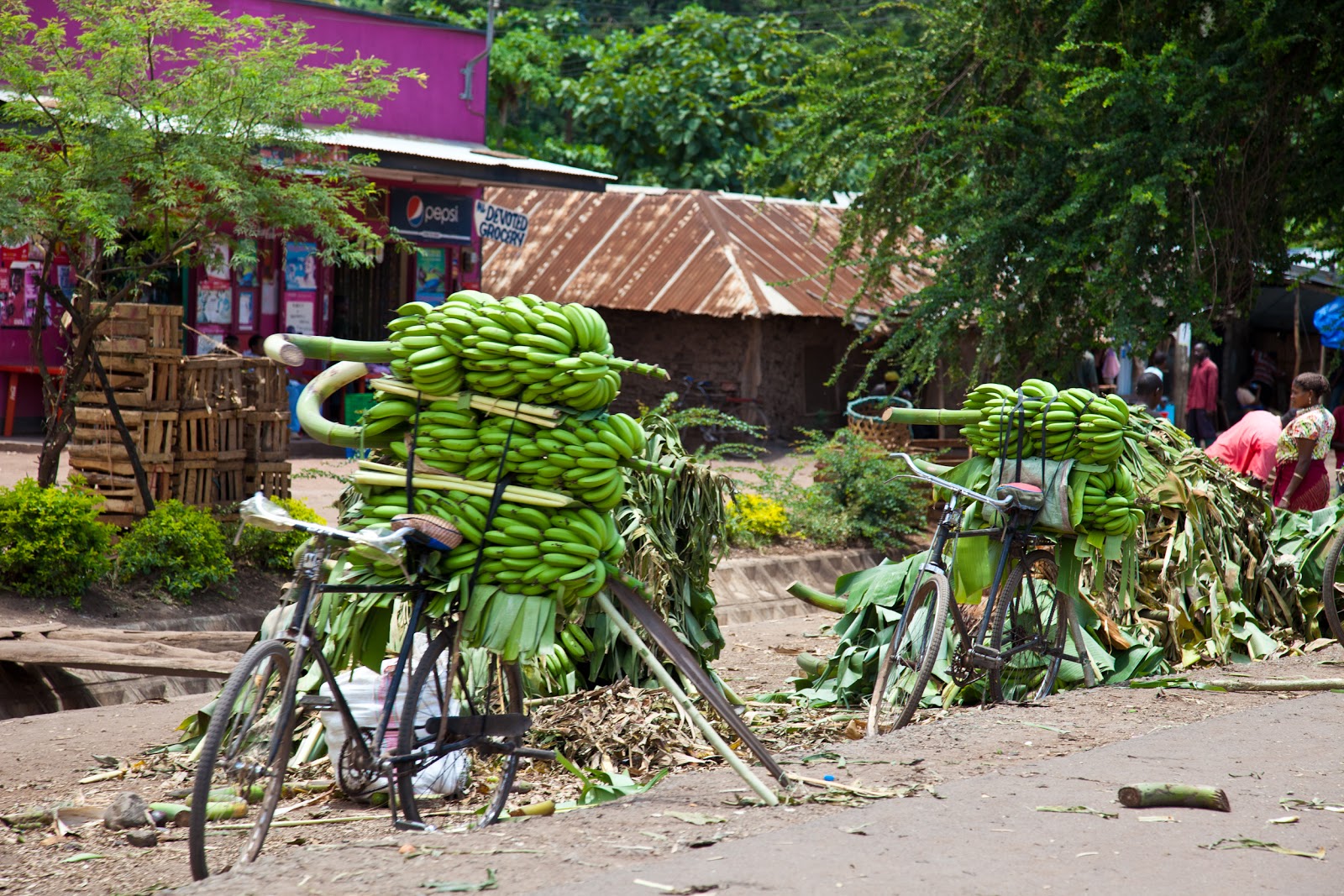 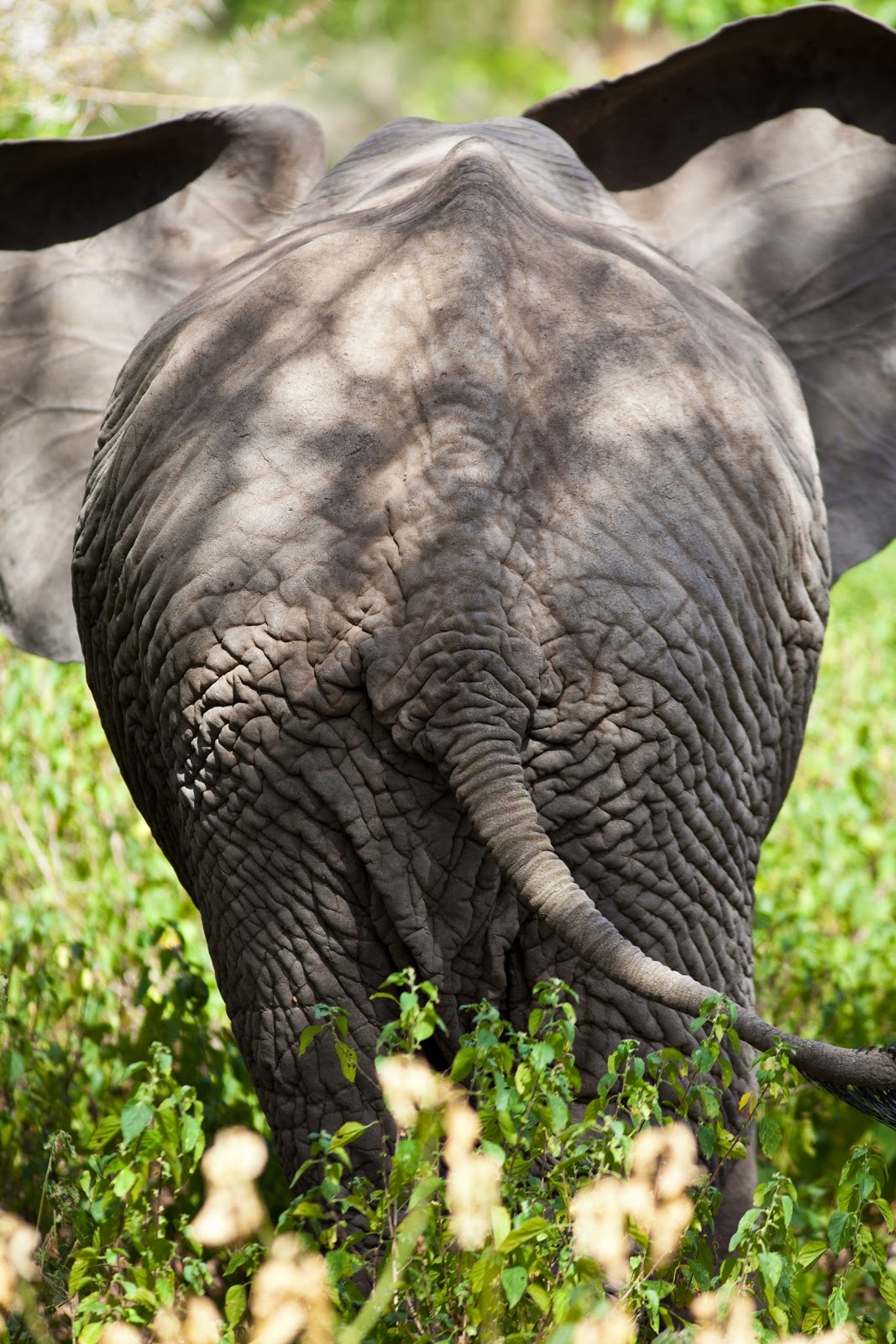 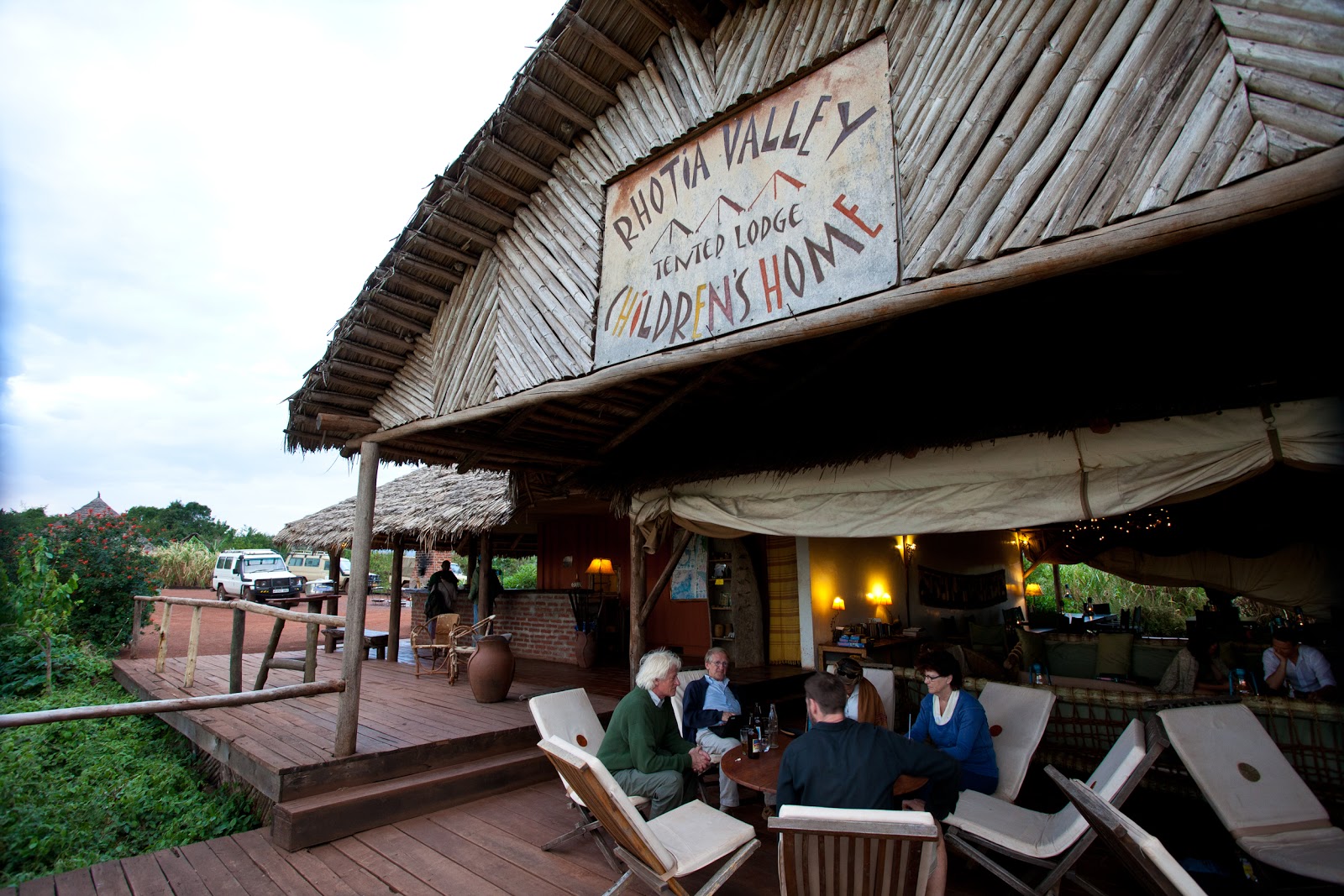 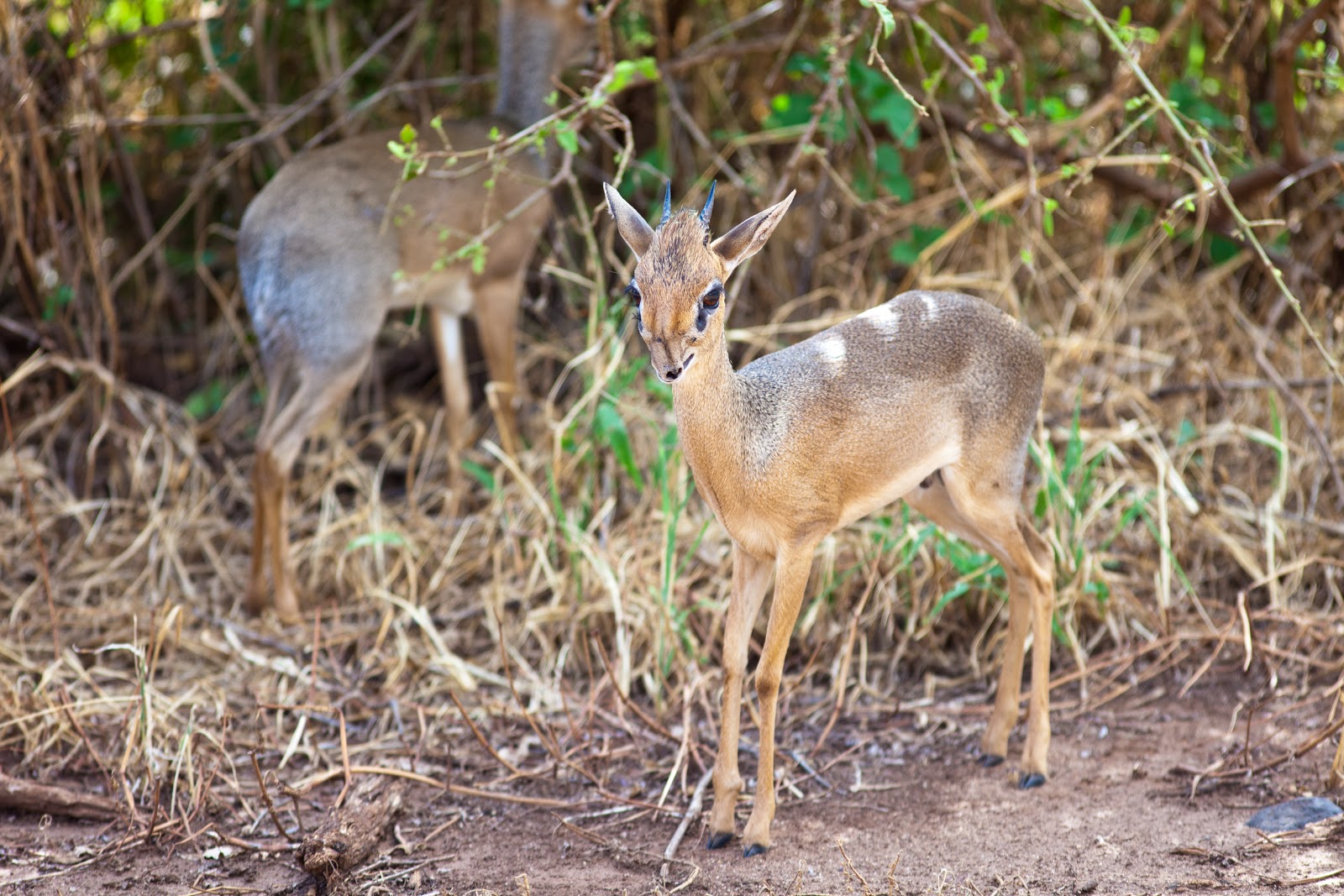 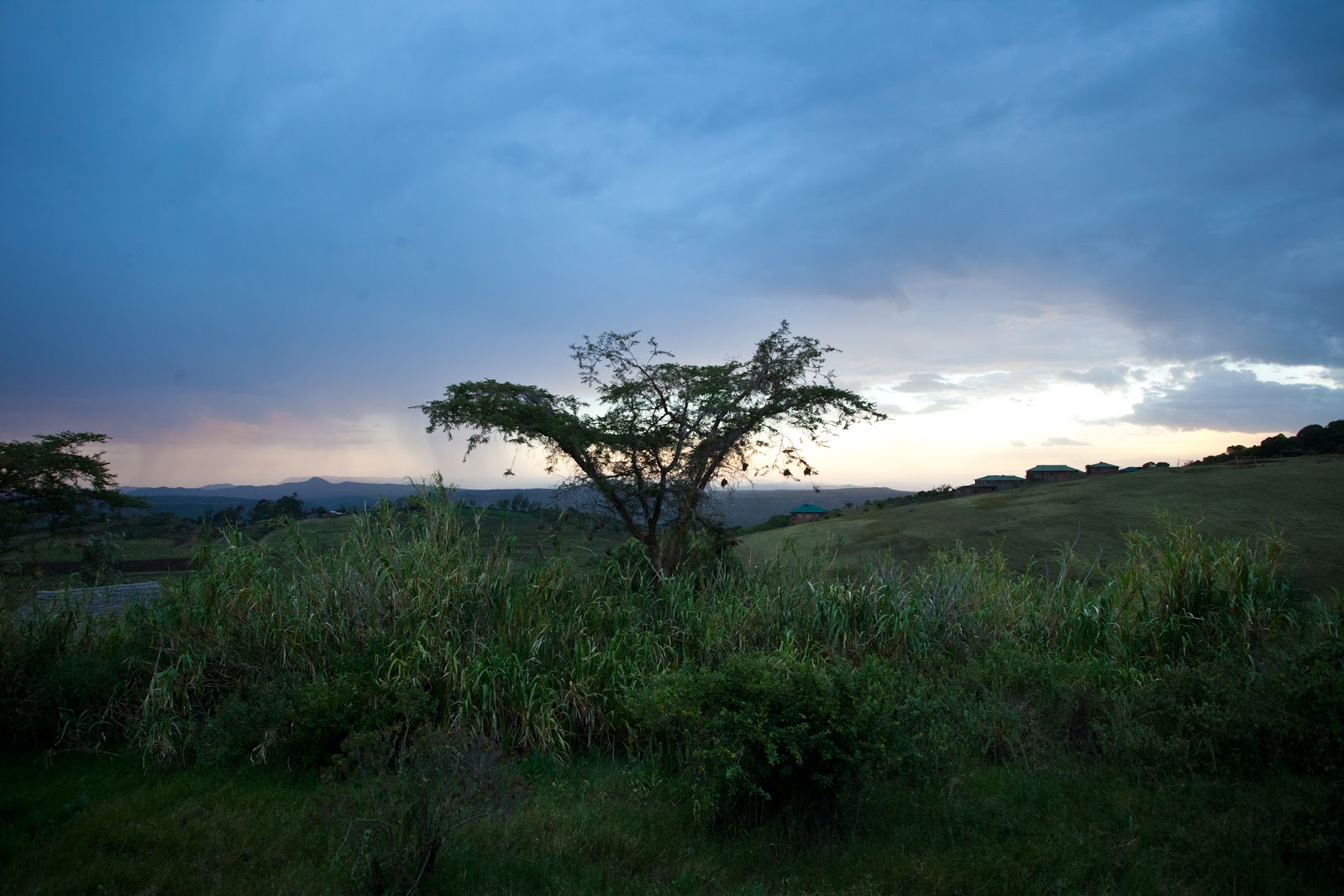