Thoughts from Tory
After our ‘english breakfast’ of toast (somewhat sweet bread, seems common throughout the world trying to provide western bread – much sweeter than commercial bread at home, but perhaps the same as cheap bread in America), scrawny bacon, weenie wieners, anaemic scrambled eggs, cereal on offer, deep fried eggy bread, fresh mango, teeny bananas, watermelon, mango and papaya juices, we sent the kids for a swim before walking into town.

The walk was described as only being 10 minutes, but took over an hour.  Despite the fact that we walk at double the pace of any of the locals! We walked along the dusty road, occasionally being choked by diesel fumes again, but waving to passers by.

Moshi town is messy and primitive, but we found a bank to collect some Tanzania Shillings from, organized a vodacom sim card for the phone, served by the ‘data expert’ who signed us up. He then proceeded to cut down a standard size SIM card for a pair of rusty scissors so that it would fit the iPhone, and guess what it worked perfectly the second it was put in the phone! Much better than our experience in NY. We asked where to eat lunch, and were directed to the Tanzanian Coffee House, where we saw our greatest concentration of western tourists so far. The kids were pretty happy to see regular food, so we did eat there. $50 for lunch today for 6 of us, about the same as dinner at the hotel last night. Cheaper than home, but not local pricing.

We were beset by hawkers when we tried to look for a map – they are not handed out here like in other parts of the world. We started at a tourist centre, but he had none.  A man said he could get one for us, and led us down to his souvenir shop to wait while a map was found. His friend wanted over $25 for the regular tourist style map, so we declined, but the bead seller, wrist band seller, and painting seller surrounded us showing off their wares. This was the kids first exposure to hawking – trying to teach them to be a little savvy, even though I know we are being had.

We did buy a couple of pictures from Ben, a man running a stall a few meters down the road from the hotel whom we met at the start of our walk. Our kids liked him and his manner and insisted that we go back there and buy a picture from him. So we did – a picture for each of the kids rooms. I’m hoping they’ll transport ok. We’ll see. No bargain there, paying $70 for the two, but the kids liked them, and we were happy to support him. That’s the whole point, isn’t it?

The kids are playing together beautifully, enjoying the pool while we are here, and are fascinated by the differences here – the people, the roads, the cars (all right hand drive, so same as at home, but old and often crappy), the food, the buildings. They have commented that people are so friendly – waving and saying hello as we pass (‘not like in Adelaide’), converting money to work out if something is good value or not, and not once complaining about a 4 hour walk in the heat and dust. Playing in the pool, they made friends with a couple of local boys (young men) who had been ‘picked up’ by a group of 3 English backpackers. They all played happy rough games – throwing them in, doing tricks (one handed hopping hand stands) and having a load of splashy fun. Very sweet to watch.

Another early night after dinner in the hotel – $40 for 6 of us, with the kids all eating well before settling down to sleep by 8, utterly exhausted after 6 hrs in the pool, a 5 hr trip to town, mostly on foot, and some quieter playtime. They’re having an awesome time and it is so cool to be here with them.


Thoughts from Charlie
Highlights for me was dealing with the ‘Data Expert’ and his scissors and ability to get the job done. It seems in Africa it’s about working with what you’ve got. We saw a couple of men walking down the road, one with a car door balancing on his head, another with a car bumper – off to see the ‘scrappy’. Probably enough metal for a meal or fuel for their own cars.

I loved all the motorbikes you see here. They are their pride and joy. 125cc Hondas or Toyos. Blinged up with chrome and anodised mirrors. Sometimes carting 2m lengths of steel, sometimes a friend, sometimes half their family. Another standout mode of transport are old Toyota hi-ace vans. These to are covered in rapper’s names or adidas logos with Rastafarian stripes and mostly used as make-shift taxis, all you need to do is wave your arm and you can pile into the van with 19 other people and their goods.

Another highlight was Ben the art salesman. He is a Masai man, who against his fathers wishes, left his village to go to school and get educated. He did, and since then his brothers have got an education and have gone into ‘business’ for themselves. He talked to us about Masai life and his life helping young artists sell their paintings . His Unicef polo shirt was well worn and held a clipboard full of young artists that he supported. He also painted and he proudly pointed out the pieces of art that he created. His back story was amazing and he delivered it so passionately, i was slightly annoyed at myself for no thinking to film or capture it. But sometimes these experiences are best, in just listening.

I was allowed to take pictures of his ‘gallery’. It was an abandoned shell of what was once a house, some rooms with old stools covered in paint, a broom to keep the dirt tidy. All very humbling.

As we were waiting for the pictures to be removed from the frames a thunderstorm cracked above the tin roof and the heavens opened up. We all (including the kids) ran around picking up his paintings from outside the broken walls and brought them in from the rain. He thanked us and we got our painting wrapped in old newspaper. It was a great end to a sale. 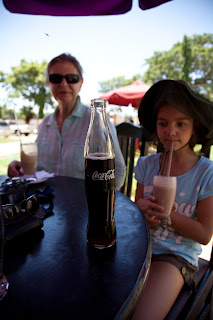 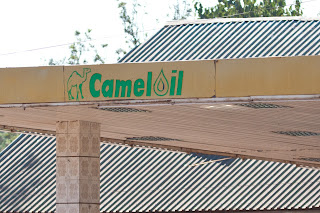 I think this is why the cars smell so bad. 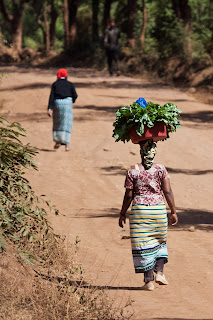 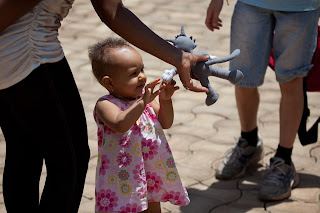 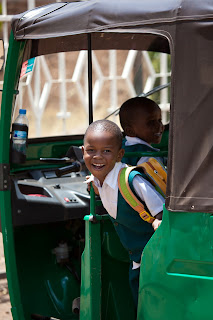 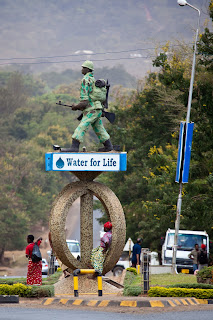 The main roundabout into town had a water fountain and hoses where a lot of locals filled their water buckets and barrels to take home. Kids with bikes balancing buckets on their handlebars was the norm. 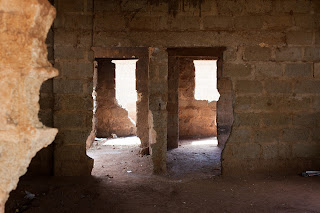 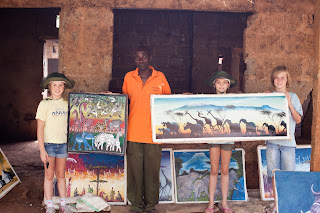 The kids posing with Ben and their new pictures. 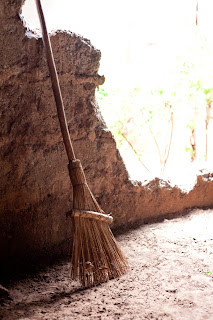 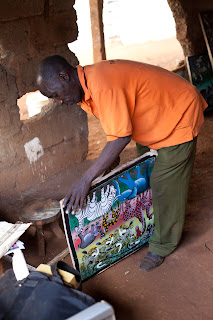 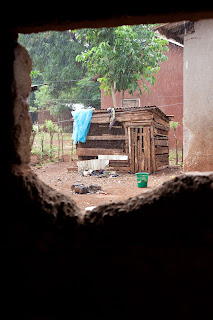 Old chicken shed through a hole in the wall. 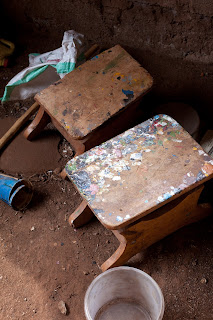