Post from Tory
Waking early but needing to stay quiet. Africa is a massive change for the kids. We arrived later afternoon yesterday, around 5.30 pm to our hotel after 33 hrs of active getting to airport type behavior (straight from school, to shower, to grans, to brush hair there (both girls in braids), wait for Charlie, then the taxi, then for Chrisse to drive back with my handbag (and all our passports, left on the back of my car which she is using while I am gone), then to the airport.
Next, we check our 6 bags through to central east Africa, have a drink at the coopers bar while the kids explore the airport, virgin flight to Melbourne, collect boarding passes for the remainder of the journey from Qatar airlines, find some dinner, go through customs (have half a tube of toothpaste confiscated because it was a 120g tube originally, thus too big for the gel and liquid laws), wait for delayed flight, manage to keep all kids sane on 14 hr leg to Doha, transfer quickly to flight to Dar Es Salaam, watch thousands of kilometers of desert from 33 000 feet that gradually change to some greenery as we get to Southern Kenya and Tanzania, dried river beds snaking their way through the sand, sharp ridges, occasional signs of human life below (roofs, occasional road), a glimpse of Zanzibar and turquoise waters from above, and we land in Dar es Salaam.
We wait on the plane for an hour, the kids play UNO, then we take off again for the final leg that takes us to Kilimanjaro airport. Watching out the window at the tin roofs, incomplete buildings, shanty towns and dry dusty roads of Dar, over increasingly lush forest and small fields, seeing small stand alone hills and the red dirt, comparing this ancient land to Australia – so similar in so many ways, seeing Kilimanjaro rising out of the plain, shrouded in haze and cloud, and a smooth landing at JRO.
We take stairs off the plane, walk across the tarmac, a man at the door checks our yellow fever certificate, another sends us to fill in immigration cards, then through passport control (only about 30 people on the flight) to our bags that made it all in 1 piece!  A young man comes up with a trolley to help us with our bags, only a few meters to the door, where we find our bus driver to get us to the hotel.  The road is sealed, but there are speeds bumps fairly regularly, so our pace is never above 60 kph. Dust blows in the open windows, poorly refined diesel fumes fill the air and we drive for 45 mins along the road between Arusha and Moshi. People walk along the road – kids in near school uniform, most wearing jumpers on this 33 degree day, women carrying bags and buckets on their heads, shepherds with their goats and cows, some dressed in the red cloaks of the Masaai, drinking at little bars – open flat roofed 3 walled lean to buildings, made from scrap, with a large ‘Tusker’ sign out the front, all the way to Moshi. We saw no tourists along the main street, so wonder where the main part of Moshi is that the trekkers visit.

We arrived at the Keys hotel, several 2 story buildings, basic and clean, and get to our rooms – 3 twin bed rooms, pine beds, mosquito nets over each, rickety shower, squeaky fan on the wall.  The pool is deep, warm, And we all pile in, trying not to disturb the 4 young trekkers reclining in the fading sun. Dinner didnt come quite fast enough – Africa time applies so food ordered for 7.00, arrived at 7.45 when all three kids eyes were hanging out of their heads!  Luca managed 4 bites before going to bed, Milla about the same, followed by Gran, then little Charlie. We finished up, paid for dinner ($50 for 6 of us in the hotel restaurant), then bed. Not much sleep, however, so today will be a long one.
Post from Charlie.

Nothing much to add from Tory’s observations above. The beer is cold, the bed at our hotel is comfortable and the weather is great. Ive encouraged the kids to bring along a toy of which they can take photos of in-situ along our African journey. Toy chosen, Scratchy from the Simpsons! Perfect! So if you see a toy cat pop up then u know the back story. 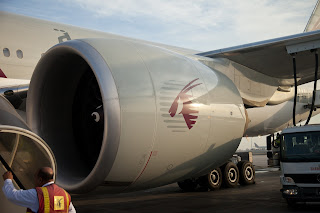 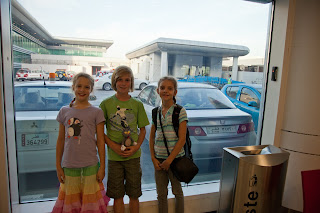 Doho, Qatar.
A quick stretch of the legs after a 14hr leg, and then back on for another 7hrs. 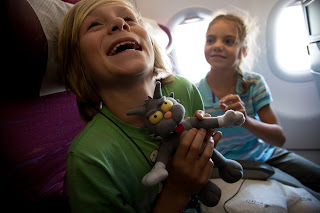 On the way to Dar Es Saalem.
Scratchy makes his appearance. 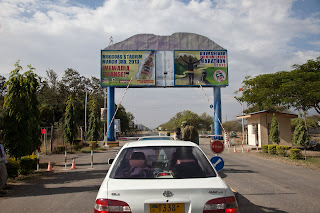 Through airport security and on our way to Moshi under the billboard advertising the marathon. 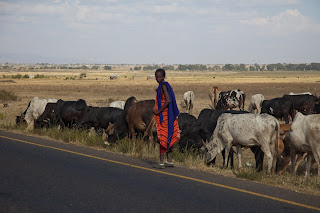 On the way to Moshi from the Airport, a Masai herder and her cows.