Day 7 – Middle of nowhere, on the way to Kirkjubaejarklaustur (I spelled it without looking – I’m getting good at this Icelandic ;)

By 5.00am it was light enough to head off – both of us still feeling very tense and nervous. Nyldalur would have a warden / ranger but would have no fuel. It was 50km away, and petrol from Hrauneyjar was still another 100km after that. We were not going to make it. We tried to be optimistic – when we ran out, someone would come by, and we should be within 30 – 50km of the town by then. We would get help. We decamped quickly, and were on the road at 5.20am. The cloud had lifted, so we were now able to see much further, and the light was brighter. There was very little rain – only patchy, so the stress of the changing wiper speed was removed. 2 hours of lava field, multiple river crossings – including one where Charlie had to test the depth of the glacial melt water to determine if we could cross safely. Off came the shoes, socks, and 2 outer layers of pants. Up rolled the thermal pants, and out he went – I do have photographic evidence. He quickly decided it was ok to pass, and spent a few minutes trying to warm up in the car before we put the car back into low to chug through the torrent. Finally, we rounded a bend and saw Nyldalur! Only 2 more river crossings. We got in there, jubilant and ready to beg for fuel – although they don’t sell it, they must have some, and getting it from the ranger station is surely better than needing to be rescued 40 km down the road. We went into the information hut – there is accommodation here, and germans were preparing their breakfast. No one had seen the ranger – he must be still sleeping. So we had some breakfast ourselves (creamed rice and apricot halves), wandered around, and waited. And waited. And waited. By 9 o’clock, I was getting pretty toe-y. After knocking on the door of the wardens hut on and off for 2 hrs, sitting in the cold, eventually a man asked if he could help us. Hallelujah! He poured a 20L can of diesel into our tank, we handed over our $40 (same price as in the towns here and cheaper than it was in Hrauneyjar) and we were on our way. More lava. More rivers. But this time, no wipers, and a bit of a view, and secure in the knowledge we would get to the next town. This last 100km took only 2.5 hrs – much easier going over all, and when we filled up in Hrauneyjar, we had only 10.5 L to spare – if the warden had given us only 10L as we had asked for, we would have limped in on fumes.

Into the cafe – the fuel cost $105 to fill up, and then we splashed out on lunch. $53 for 2 burgers, 2 cokes and one beer. Oh well, it is what it is. And of course, this cafe / servo had free wifi. Why not? So Charlie was able to upload a couple of these blog postings while I planned the rest of our afternoon.

Next stop – Landmannalaugar. This is a favourite destination for local and foreign travelers – ‘painted’ hills of yellow and red rhyolite, steaming vents, lava fields, lakes. As we got closer to the Landmannalaugar region the landscape started to change dramatically from the barren monochromatic land we had seen 2 days previous. Large hills rose from the desert floor. At first they were made of black sand covered in a spiders web of lichen. As we got nearer the colours changed from black to to rust red and ochre sand. All the geological colours you could imagine with a blanketing of bright green lichen as far as the eye could see. Our photos couldn’t capture the enormity or beauty of the region so we just soaked it in. We stopped at Ljotipollur – a red crater filled with blue water – rich in trout (!). The black and red (from iron ore deposits) steep crater had stripes of green lichen, streaking down the slope. Were scambled down the to waters edge – following what started off looking like a track, but was really a water course with some other boot prints. We kept pulling off the road to take ore pictures to try to capture the colours, but even with the sun poking through the clouds, it couldn’t keep up with the beauty. One hill we stopped on was very soft soil and lichen – I noticed some cracks and peered closer – the entire soft hillside was full (or hollow?) of fissures, and most of the ground we stood on was only inches thick! There were holes I could not see the bottom of, and other fissures that were twice my height in depth. We stepped very very carefully!

At the Landmannalaugar hut, we walked across a lava field – this one had mainly obsidian rocks – shiny black glass like rocks formed when the lava cools very very quickly. With the soft green moss and lichen growing over it, it was a very pretty (and crowded) walk. Over the lava field, we came out into a flat valley, with these painted hills around it – steaming vents dotted these hills, but without the noise and ferocity of Hverir a few days ago. One green mossy hill was completely steaming – we walked up it along the path, feeling the rocks that were perhaps room temperature rather than hot or cold. It would look amazing in winter in the snow – this hill would be green all year round thanks to the central heating 🙂 We spent 5 hours wandering around this region, then headed towards the coast. More stunning vistas, many more river crossings, eventually reaching – wait for it – sealed road!!!!! We headed for the small town of Kirkjubaejarklaustur – again, all farms have their own waterfall from the cliff behind – all postcard perfect. A massive rainbow appeared to touch the road in front of us as we turned off and made camp for the night after another 14 hour day of traveling. $3.50 for a shower, $30 for the nights campsite (hand washing the clothes, then trying to dry them overnight) and we’ll be all ready for tomorrow! 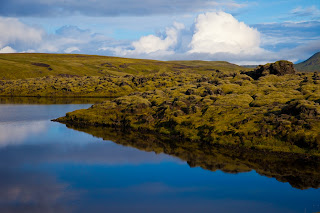 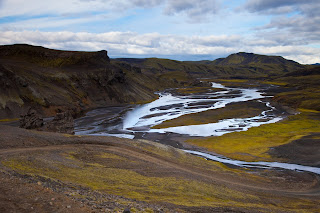 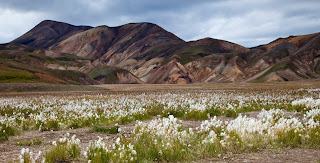 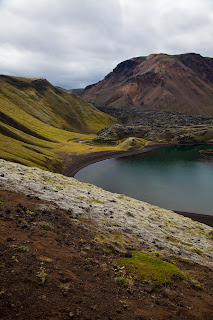 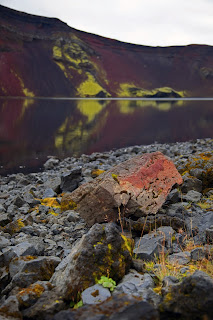 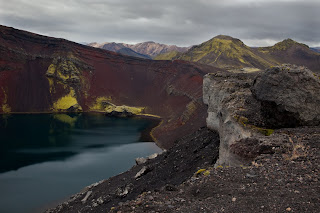 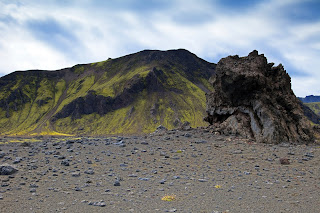 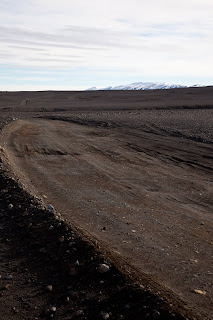 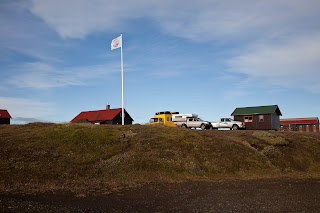 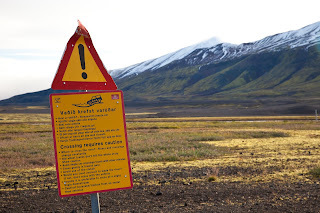 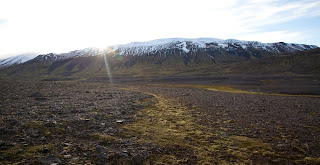 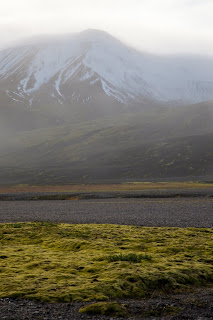 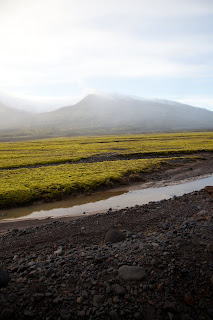 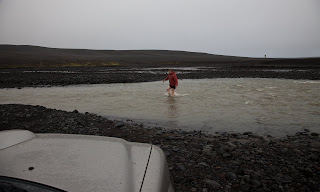 Testing the depth of the glacier melt water. So cold – so painful. 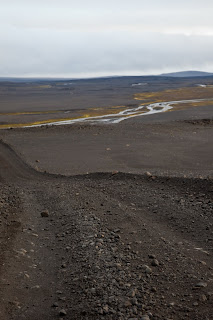 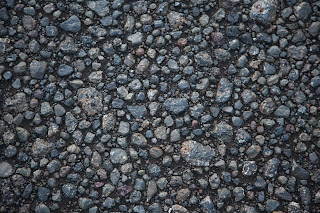 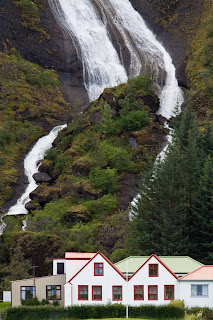 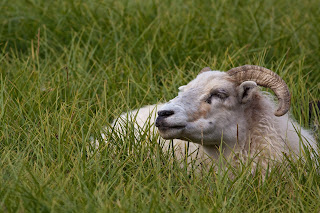 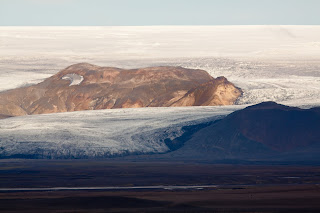