Day 6 : Ice Caves, Glaciers, Volcanoes and The Road to Hell and Beyond and then some.

The biggest day of driving on this holiday awaited us. We were about to cross the interior From Lake Myvatn down to Nyldalur and through to Landmannalaugar. At over 500km of driving it was going to be quite a day. In Australian terms this isn’t much to write home abut. But as we knew the road was rated as ‘white mountain roads’ we were in for a long haul. Our last ‘white’ road was to the Lava Caves at Surtshellir on our first driving day. The 10km road was unforgiving in our camper and when it turned into 25km it almost turned into tears. Add to this, Myvatn was our last chance for fuel for over 450km – Agust our friendly car hire man told us that the Triton should do 400km+ easily. We were playing with fire but wanted to push on.

Our first destination was the Ice Caves at Kverkfjoll. It was a southern detour down to a northern outcrop of the enormous Vatnajokull Glacier of about 125km out of our way but loosely factored in. The road was tough, very tough. Rocky, winding across lava fields, deep black sand and driving, unrelenting rain. According to our guide book the rain was ‘mist driven horizontal by the driving wind’. Either way, it became quite the ordeal with our squeaky out of date windscreen wipers and a road that took us in all directions. The wind and rain came consistently, but our position kept changing, so as well as trying to negotiate a path through the rock, keep a lookout for the road markers so we knew where the ‘road’ was meant to be, shift gears between 1, 2, and 3 and keep adjusting the wipers from each grade of intermittent to consistent – it was stressful. After taking a wrong turn and adding 25 extra km to our journey we made our way to the Ice Caves. It was a box I wanted to tick on our trip. From the photos I’d researched it looked absolutely stunning. The caves are formed by heated water running from under the glacier. The running water turns into a raging river as it exits the glacier. I’d expected caves you could actually explore – but Im guessing we were 4 months too late. It was still a sight to see though. The Vatnakojull Glacier is the world’s largest icecap outside of the poles, covers 10% of Iceland and contains 3000 billion tonnes of ice a-top the mountainous moon like landscape. A hike down to the base of the glacier saw some good pics and then it was back to the car.

Out next stop was Askja Volcano 100km due northwest. Again the driving was tough averaging between 45 – 60kph. We were still in good spirits though and were looking forward to seeing this landmark. Askja caldera is 50 sq km – in 1875, 2 cu km of tephra (volcanic sand and rock) were ejected from the Askja volcano, bits of it landing in continental Europe. Ash from the eruption poisoned much of the cattle here and sparked a wave of emigration to America. After the initial eruption, a magma chamber collapsed creating an 11 sqkm hole 300m below the rim of the original explosion crater. This filled with water, and is now icelands deepest lake at 217m! Askja has erupted as recently in 1961, and is due to go again about now. Along with a few other big ones – it is amazing to realise most of this landscape is so young, and will change again many times in our lifetimes – this years eruption at Eyjafjallajokull was very minor by Icelandic standards and we will see many bigger ones this decade.

As we arrived at Askja it became apparent that it had snowed in only the last day or two. Light now blanketed the black sand and jagged mountain range that formed the volcano. It was stunning – looking like zebra stripes across the land. I was probably excited more for the reason of never experiencing real snow before. We arrived at the car park at 4.00pm, 4 hours past the time we had budgeted for the journey. Un-fazed we dressed in our layers of gloves (including black industrial dish gloves all round!), balaclava, jackets and multiple underlayers and headed onto the frozen wasteland to see the blue lake at the base of the caldera – 4.6km hike across the range. The going was flat, easy and fun. We threw snow balls, trudged in 15inch deep snow (when we found it that deep!) and pondered about the forces that created this landscape. Coming back was hard. As we had entered with a tail wind we then had to deal with it on our faces on our return. The rain was constant and our wet weather gear drenched. The washing up gloves held true so that was a bonus.

It was at this point that that our goal became more real. We had to make 235km across the barren landscape with under a half tank of fuel, wind, 2ºC outside temperature and the ever present rain.

As we left Askja the terrain turned from bad and into a nightmare. We had already driven for 8hrs and only seen 3 cars, so a sense of real danger started to become apparent. On reflection, in local terms, this would be the equivalent of doing the Gunbarrel highway with a Lonely Planet guide and a ‘she’ll be right’ from the Hertz Rental lady. We had no idea of how tough it was going to be. Tory asked about the road from a local, I asked about the river crossings and no-one was fazed or concerned – this was a good road, a trusted track and it seems, a cake walk for anyone with a 4wd. How wrong. How wrong.

The first 20km consisted of massive floodplains that stretched into the horizon. The road turned into a river that we followed, like a salmon heading upstream. The next section was 10km of foot deep black sand. It was rugged and pulled at the steering wheel whilst the ‘mist’ bore down on us. Each section of terrain change I had to re-adjust my calculations for our destination. ‘40kph, 190km to go – 4.5hrs’, 25kph, 165km to go – 6.6hrs’ and so on. As we exited the sand we entered the Lava Field. At 2200 sqkm it was vast and all you could see for hours upon hours. At some points we were going 20 in an hour and less. Wherever I could, I put the clutch in and rolled down hills, kept an eye on the taco and adjusted gears to suit. The fuel gauge was my god and I worshipped it’s existence in between gear changes and wiper speeds.

3hrs in, in my shoulders started to ache from the violent battering. The wheel flew this way and that, as the tires hit jutting stones and brittle lava from either a few generations or an eon ago. The landscape was pure monochrome – black, grey and the white sky, obscuring our view beyond 40m or so and my desire to capture it digitally was taken over with a feeling of survival and a need for safety. Outside the temperature with wind gusts and rain was in the minuses. The light was fading at the same speed as our fuel gauge. A camp named Nyldalur was 90km away and after 2 hrs driving we were still only 35km closer. We decided to pull off the ‘road’ and camp the night. We popped the camper roof dressed in balaclavas, woollen hoods and our ever present gloves, and climbed inside. Dinner was a cup of soup and minimal conversation. We lay our heads down after 13hrs driving and only 390km of travel, taking off only the wet weather gear to try to sleep on the windy, barren ridge. 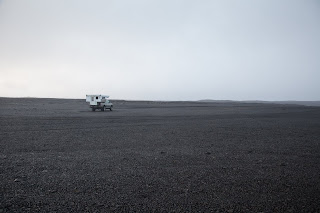 Our campsite for the night. 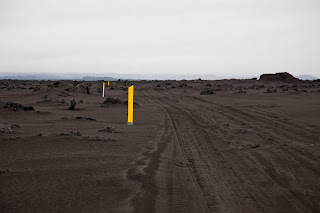 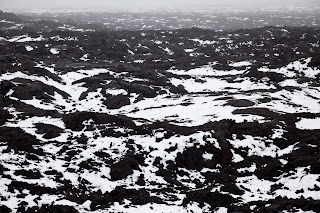 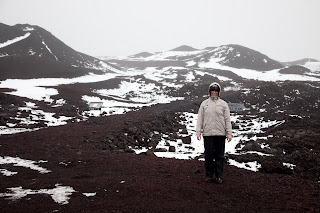 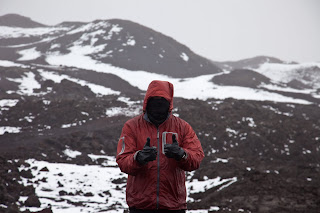 Rugged up ready for the snow covered volcano. Fricknn cold – incase you wondered. 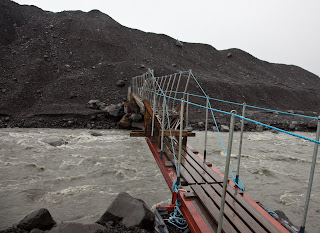 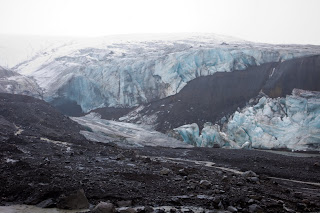 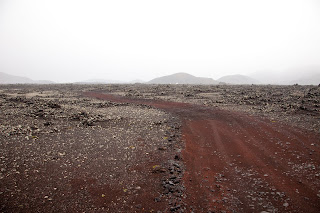 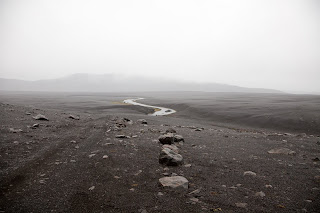 Driving the road from hell. 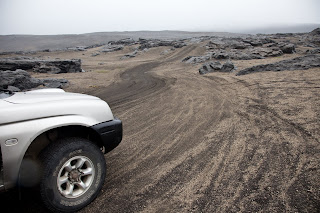 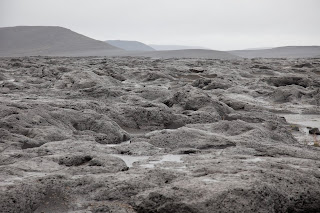 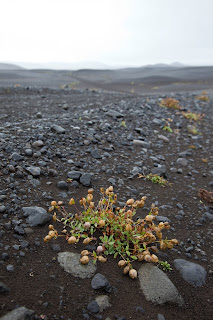 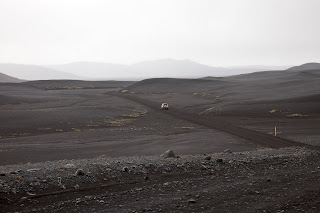 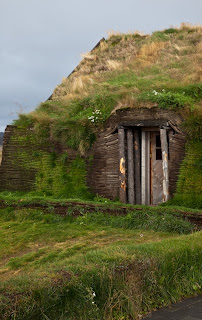 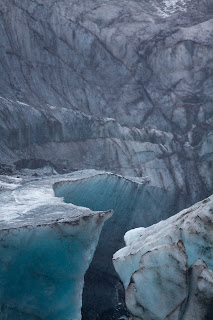 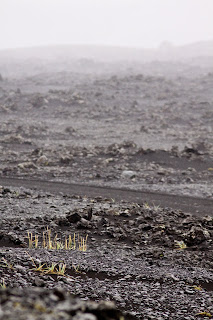