Woken early by scuffling and growling sounds outside our tent, but too early to see anything. The camp staff told us it was probably buffalo  We did see a small bat hanging from a branch!  As well as the lions nearby, we can expect elephants, buffalo, baboons and virtually all the other plains animals to come by. I think Charlie was actually scared! We don’t know exactly what is was. (Charlie’s note – Tory bolted upright at 2.00am and held my arm!)

Lions on the rocks after breakfast, then just down the road a small group of elephants – mother, father, young daughter and either twin or single born and adopted child – both little ones about the same age of 2 or 2.5 years old. The female is pregnant again – they do once the child is 18 months old.

Bohor reedbuck leaping away and out of sight, one of the bigger African antelopes. Outcrops of granite, like marbles stacked on each other, similar to Remarkable Rocks and Devil’s Marbles in Australia, but surround by lush stands of trees.  Euphorbia again, acacia, sausage tree, no baobab, Even date palms along the river. Much swampy ground, tricky driving, but George is a legend. Charlie was well impressed with his 4WD skills, his thoughts on a tip were changed on this day.
Lots of flies.

A small group of three Warthog, a group of over 30 baboons, a few mongoose (banded), giraffes, wildebeest, buffalo, zebra, Egyptian geese, more warthogs, a few safari trucks, Hartebeests with young, 6 young lions sunning themselves on the rocks, a glimpse of a hyrax (like a guinea pig, related to the elephant, aardvark and dugong!) and many hippos.

A couple of mating pairs of lions lying in the sunshine between sessions, dozing quietly, occasionally scratching at flies or yawning. They mate several times per hour for a 3 day period. Boom!

Two herds of elephants further along the same river, one herd of 15, 9 young including one bub barely visible in the grass. They were heading back onto the plain while the other herd approached the river.

Next were saw Masai cave paintings including a picture of a bike! The paintings are therefore thought to be 100 – 200 years old.  We couldn’t get out of the car as the 6 lions were just on the other side of the same rocky outcrop. Then we drove to Ngong rock – another granite outcrop with ‘marbles’ balancing on top. One of the ignus rocks on top was hollow and has been used by the Masai for centuries as a musical rock – hitting it with a handheld rock makes it ring like a big brass bell. They used it as a means of communicating and for its musical qualities.

A cool morning, giving way to a hot day before the thunderheads built up again, with a strong breeze to blow them away, so no actual rain, which is good.

After we returned to camp in the evening, we got everyone through the shower. When it was finally our turn (Charlie and me), the lion on the rock, perhaps 100m away let out an almighty roar. It sounded as though it was right next to us!  He kept carrying on like that for almost 30 minutes, as the sun went down, sitting tall and proud on his rock overlooking the plains. We couldn’t believe how loud he was! We were the only people in the camp tonight after the Dutch couple left this morning, as well as a young Canadian family with kids aged about 8 and 4. Quite nerve wrecking to be out here with a 4 year old boy, I’d have thought! 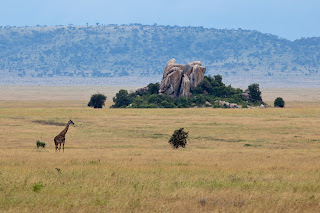 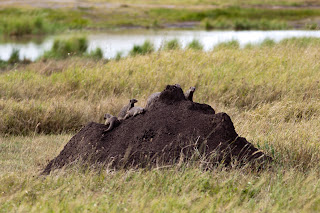 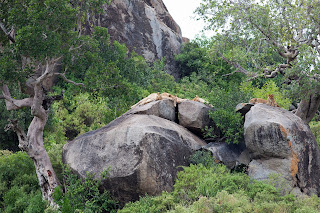 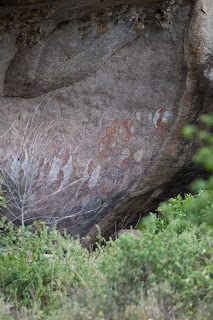 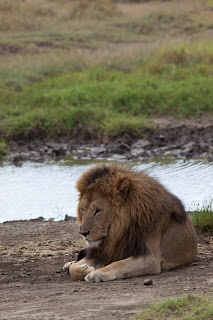 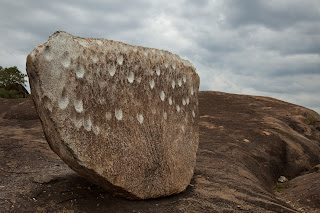 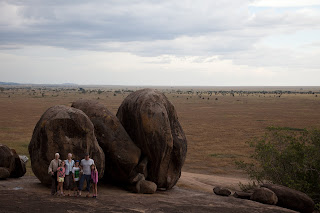 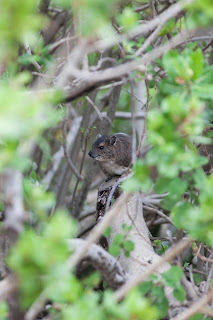